Domain types based on probability monads

September 20, 2020
(Important:  I did not create the image shown in blogger preview - it is from NCat Lab website!)

Following up on previous post on Composed Stochastic Proof, we now enumerate:

What the typed world owes the authored world

To knit this knowledge into useful, portable applications, we proceed with four major tasks:

Task 1) Starting from a shared library conceptual math knowledge, we identify applicable categories that are useful in our application model.  The NCatLab website is a great current resource on existing work.  The page on monads of probability, measures, and valuations contains this summary table of the most useful, widely known functional probability concepts. These are the core ingredient math concepts needed for robust, general processing of probability models in functional computing environments.

Task 2) Build upon our chosen categories some verified theories of useful domain types, by  wiring together desirable concepts from a proof library such as MathLib (formal math library developed by Lean prover community).

These domain types formally define our required categories and functions.  This definition process leverages the ideas of dependent type theory, which we have delved into in previous posts here.  For app developers, what matters is that the MathLib package for measure_theory provides reusable knowledge in the form of a set of types (propositions) and proofs.  These mathematical types are the  foundation of interoperability of our powerful math concepts (from Task #1 above), which are primarily categories and functions.

Any strongly-typed programming language may define corollary types with equivalent meaning and (provably) equivalent data serializations.  These two forms of equivalence correspond to intensional and extensional equality, which may each be reasoned about interactively among humans and machines.

Having adopted such a formalism, then applying our typed concepts reduces to component assembly:

Task 3) Assemble a compliant, sufficient network of components to verifiably implement the stated type contracts.  The stronger and more faithful the types are to our proof model #2, the more productive this assembly effort #3.

Axiomagic is strongly available in dependent-typed environments with proof support.

Axiomagic is compatible with dynamically-typed environments.

With these choices made, we obtain a compiled, deployable space of domain types.
What remains is data authoring, generation, and/or ingest, as appropriate for the application.

This process is broadly familiar to most practitioners.  What our method adds is the well defined target contract of the domain types constructed through Tasks #1,2,3.  This contract allows for verifiable data streams with precisely defined semantics, facilitating high quality outcomes for applications.

Performance and Correctness of Strict and Relaxed implementations

As we apply methods ensuring formal correctness of our results, naturally performance concerns will be raised.  In general we expect that attaching strong guarantees may often inhibit scalability of computation in well known ways.   We apply the common principle that guarantees are most needed in interactive environments for design and experimentation.  Production deployments will generally use only pre-approved constructs, with fewer explicit guarantees, while using the same immutable functions and semantic data structures defined in our interactive formal environments.  In the interactive environment, we commonly work with small dimensional systems, with high degrees of symbolic expression and element interconnection (such as correlation).

Returning to our Asset Allocation example, we now work to represent useful general probability distributions for financial asset performance measures.  These distributions are defined using strongly typed monads, compatible with the MathLib types in the Measure_Theory package.  As our first attempt at component assembly, we build a Scala 2 implementation defining a programmer's domain type model (Task #3) and some data generators exercising the model (Task #4).  We expect to refine this domain type model for increasing levels of harmony with the MathLib measure_theory (from Task #2) and sufficient mathematical power from the Giry monad and related constructs (from Task #1).

We expect this same domain type model to eventually be strongly available (in Idris, Lean, F*, Agda, Coq), weakly available (in Stan, TensorFlow, Dotty, Julia, Rust, Typescript) and compatible (with Python, R, and everything else that can serialize data structures) as outlined previously.

In informal terms, X is any finite N-box, and may be visualized and computed over as such.

Thus X is isomorphic to a cartesian product of compact closed intervals in R, each specified by an inclusive lower and upper bound:

Thus we obtain an obvious and immediate way to compute the euclidean (N-)volume of X.

X is a complete metric space equipped with the euclidean distance.
X is a compact Hausdorff topological space.
X is closed (as a subset of euclidean R^N), and includes its own boundary.
X is a Polish space.
The event space X is not itself treated as a vector space, nor is it equipped with any operators or special elements (other than its boundary elements).
In the special case where all the {width_n} are exactly 1, then X has volume 1 and is isomorphic to an N-cube, but here we do not make any further use of this special case.

Next we generate B_X = the Borel Space on X, which is a measurable space containing all open subsets of X.

Next we define an example of a measure: uniform_X as the uniform probability measure over B_X.("Uniform" means that uniform_X treats all events in X as equally probable).
Then we know that the continuous probability mass density of uniform_X is

Similarly the probability of drawing an event in any measurable subset Y of X (where formally Y is an element of B_X) is just:

Note that Y need not be convex or even connected.  It may involve many small pieces of X, but (roughly speaking) each such piece must be open or compact.  The requirement that Y be a Borel subset of X ensures that Y is measurable. When we compute the (N-)volume of such a set, this is the same as the Lebesgue measure of Y.

Now let us step back from the technicalities and observe what we have defined.
We have specified a continuous finite event space which is natural to visualize and compute over,
with well defined distance and volume functions.  Unbiased uniform samples (from uniform_X) for this space may be generated as bounded N-vectors of real numbers. So we have a structure that straightforward to work with, both mentally and computationally.  However, we have not yet defined any interesting probability structures.

X and B_X may be treated as the cartesian product of N (or fewer) separate topological spaces and associated Borel spaces.  We may informally say that X and B_X are "decomposed" or "projected" into these "smaller" component spaces.  These operations set the stage for the definition of marginal probability distributions.

A distribution measure constructed over B_XX is a joint distribution over events in XX = (X1,X2).
Then integration may be used to project separate marginal distributions over B_X1 and B_X2
(and/or any of their component subspaces).

Popular posts from this blog

August 22, 2020
Here we build on the approach outlined in the last 3 blog posts: General Background in knowledge graphs and mathematical type theory Informal Survey of open satisfaction solvers and provers Infrastructure Options for typed knowledge graphs Now we outline a practical modeling approach in an example knowledge domain:        Asset Portfolios and the Allocation Decision Problem We develop a flexible, minimalist theory for describing collections of assets, and estimated knowledge about the assets and collections. These descriptions may be aligned with FIBO ontology concepts, for commercial integration purposes.  Here we are concerned only with  abstract mathematical description sufficient to analyze portfolio allocation decisions, in the context of available knowledge about the constituent assets, and given investor objectives.    Here is a first simple problem, to motivate our thinking: Given a list of 10 available equity ticker symbols, assuming we may buy any fraction of a share w
Read more 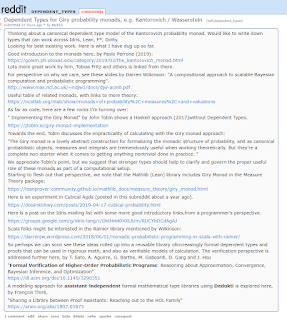 composed stochastic proofs - motivation I posted some background links and concepts on Reddit r/DepdendentTypes Dependent Types for Giry probability monads, e.g. Kantorovich / Wasserstein  (+ followup comment ) In this post, we begin tackling the kinds of distributions needed for our Asset Allocation Example . joint distribution monad as dependent type We define our strong typed stochastic computing structure in these 3 stages 1) Mathematically, in informal human-readable equations and type descriptions      (formally encoded and exposed as visible API in 3 below, using infra from 2) 2) As functional abstractions, using the kantorovich monad formulation      (formally encoded as submerged infrastructure, used by 3 below) 3) As a formal dependent-typed API usable from suitably strong-typed environments such as Lean, F* Idris Agda, Coq, Isabelle, HOL, MMT Scala 3 (Dotty) Restating the WHAT:  The software types defined formally in 3 are refinements of the informal types from 1, relying o
Read more